What's black and white and red all over?

Right...two new bags that are made from black and white and red suits.
I used the hardware and handles from an old purse.
After using this purse all weekend (I HAVE to see if they are usable or not!)
I've decided it's my favorite one yet. 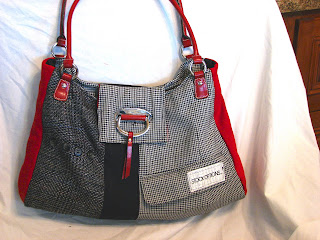 I love the back pocket: The center stripe is from men's suit pants and
fits my sunglasses and keys perfectly. 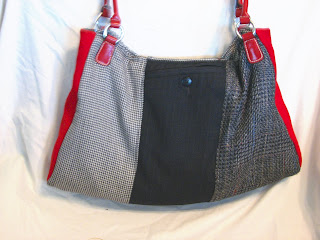 The section on the left is the sleeve... 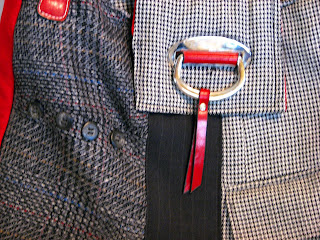 The section on the right is the front outside pocket of a different jacket
and perfectly fits my cell phone. Again---hate searching for it in a hurry.
And see what I mean about the labels?
"Stock Options" So adorable. 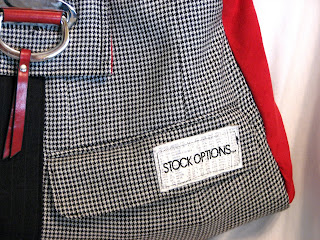 The second one here is made with some of the same jacket but the center fabric is a denim twill fabric that is sturdy and so cute---black and white stripe. I added an outside water bottle pocket out of the sleeve of the black and white houndstooth but not sure I like it. Maybe I'll redo it with snaps so that it can be removeable. 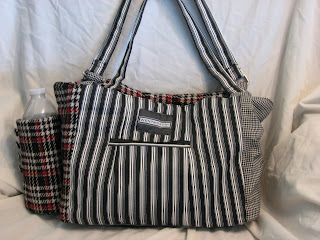 The inside is lined with red silk from a thrift store blouse. 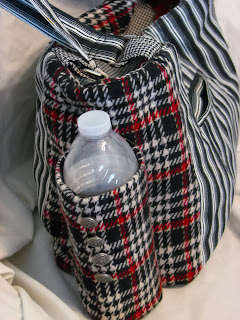 I'm trying to figure out how to make a new website for the purses so that that isn't all that gets put on my blog even though it's what is taking most of my time lately. That way you can totally skip it if you want or just click on a link and go directly there.
I don't think I'll stop sewing these purses anytime soon. I have two more cut out and ideas for so many more. A spare closet has my recent purchases hanging there calling me to make them beautiful and wanted again. How can I say no?

So here is the second attempt at making bags out of men's and women's suits. This one was harder to do for several reasons: I cut the pattern and fabric BEFORE I had really figured it out and it took a zillion tries to get it to work the way I wanted to, next time I'll think about it more and sew less; also, the stuff I used as interfacing was a lot stiffer than before and I'm not sure that's what I wanted either but the outside fabric was so soft and floppy I thought I needed it. Now I realize I probably didn't. It doesn't affect the look or use of the bag but was so irritating when piecing and sewing.
Anyway, here's the front. The bottom is a woman's jacket that had belt loops and cute pockets so I HAD to leave them on and add a belt for fun. The top is a woman's jacket also but so soft and yummy with cute zippers on the front and sleeves (look for those in a later bag I have planned). The handles are cannibalized from an old purse and the inside is a pair of men's suit pants that I couldn't resist. I've made it so that all the pockets are still functional so there are several outside pockets that are working well for the phone, glasses, keys, all the stuff I want to get to easily and hate when they get lost in the inside of a purse. Nothing worse than searching among the junk at the bottom of a purse when your phone is ringing and ringing and ringing... 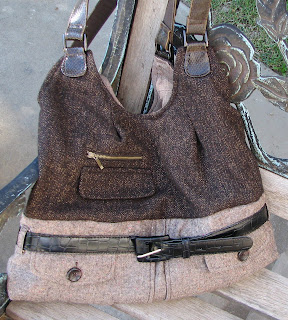 Here's the back. I think it's my favorite part.
Just a cute flap pocket and simple belt and bottom. 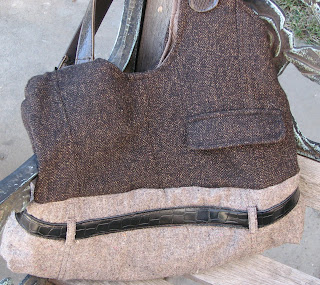 The inside with a magnetic closure, slit pocket from the pants and that's it! 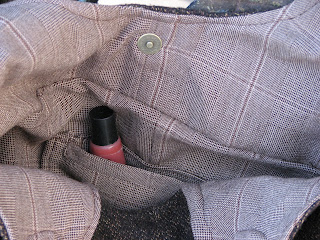 One of the interesting things this week is that 3 people tried to buy the red purse from me. Random people at the doctor's and thrift store (buying jacket's of course) and the grocery store. Joe has given me orders not to sell it but the last offer was good enough to consider if I'd only had somewhere to put all the stuff that was inside of it. Next time maybe I'll negotiate a sale if it includes them providing a bag to put my stuff in to take home!