How I spend my Saturday mornings

Yup. This is how I've spent most of my Saturday mornings since school has begun: watching Jr. High football. I love it except for the fact that it has been near or above 100 degrees for every single game and the stands always seem to face the sun (but what doesn't face the sun in California?) and as uncomfortable as I am, I get a little worried about the players, especially #71, my favorite starting center. 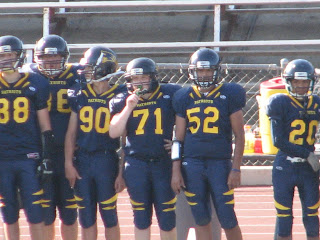 Lining up for the play and staring down the other players. That's his third favorite part of playing. 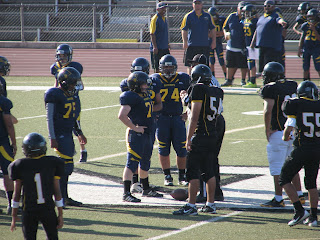 Here's his second favorite part: the thrill of the snap! 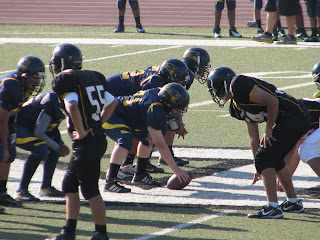 And here is his favorite thing of all: blocking the players even when they are twice his size.
He held this player off through the whole game 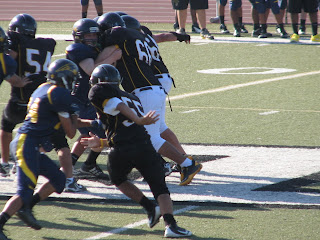 Not MY favorite thing to watch but he sure does love it and is getting so much better at it. He's earned several "hammers" for his helmet this year. When I asked what that meant he said (I swear!) "Hard head".
Me: You get a hammer sticker for having a hard head? Uh...
Him: No mom, it's for hard hits.
Me: Oh. Well then...
The front line's had several plays where they've completely cleared the path for long runs straight up the middle and even a touchdown or two. When the runners brag about making the touchdown, Joe (gently I'm sure) reminds them who helped them get that touchdown.

I never thought I'd love watching my own kid play football so much, especially when he comes home with bruises and cuts all over his body. By the end of the season his arms and legs are nearly solidly bruised.  I never thought I'd see a kid of mine proudly pointing to each bruise and explaining how he got it. Can you really get that giddy over hitting and being hit? I guess so, if Joe's anything to go by. And just a little shout out to all his siblings who helped him learn how to take a beating and still be laughing about it while in pain. I guess you all get a lot of the credit for who he is on the field.
Go Team!
Posted by Karen at 1:02 PM

When I take a look at your web site in Safari, it looks fine however,