A few weeks ago we attempted a trip to the snow. It was a weekend of wild and wooly weather, but what week hasn't been wild this winter. For those of you who live in the snow this will seem so easy, get up, put your snow clothes on and walk out the door and sled down the hill right next to your house. For those of us living in sunny california it's a bit more complicated. First: find the clothes you haven't used in a year. Figure out what fits and what doesn't. Shop at the thrift stores for what you need to replace the old, too small, or worn out stuff. Next: Pack lunch, boil plenty of water for hot chocolate and cup-o-noodles and pack all into the car. Last: locate the snow discs and board that are supposed to be just inside the garage but really hide in the trailer that is parked 10 miles out of town. After several hours (and only a few bad words) later, we're off to the mountains
We have a lovely drive to the mountains in wet and stormy weather but we are not afraid because we are prepared in all ways for bad weather. Except one. We didn't pack the snow chains. No cars are allowed into the park without carrying chains even though we are assured they will not be needed. So...back down the mountain to get chains: only a half an hour down and then half an hour back. The trip back is different though. The road is completely changed. There are rocks, pine needles, dirt and branches covering the road and tons of traffic going the opposite direction. By the time we got up to the park entrance again, we were informed that the park was closing (how do you close a mountain?) because of strong winds that blew trees over and crunched cars trapping people in the park and out of it. The ranger was even blocked from his home beyond the park.
To make a short story long, that was the end of our snow trip. We drove down the mountain a ways and ate our picnic lunch in the church parking lot. Poor Joe. He had been waiting for a snow trip for two years. Poor Pookie who also loves the snow. Poor mom and dad who had put up with a long and frustrating day with no apparent reward. 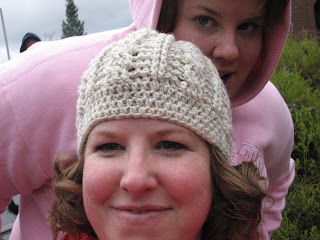 Beginning of the day, so optomistic and innocent. 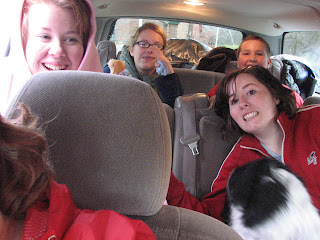 Gotta love the happy face in this picture! 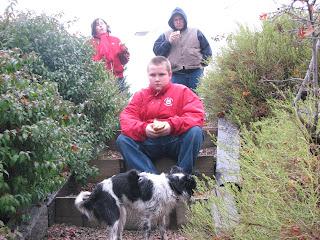 lol poor joe is right, he looks so sad.